I recently had the opportunity to use my acoustical and musical knowledge to design an acoustical enhancement system into an outdoor stage area.

Situation: Acoustic instruments weren’t enough to fill the outdoor space when an audience was present. A large “shell” behind the space is not possible due to local zoning and financial limitations. Also existing attempts to use a PA system for amplification leads to feedback and “volume wars”.
Task: Design a simple, and relatively inexpensive method of electrically enhancing the listening experience –  that is completely invisible. Action: Multple Pressure Zone mics pick up any audio that happens on stage. The sound is amplified (with loudness limiting), delayed, and sent to 8 strategically placed and disguised speakers.
Result: Performances are now easily heard, and musicians in the audience are quick to ask why the performances sounds so clear. Cost: under $5000.00

The concept of a distributed speaker system can be compared to outdoor lighting. For example at a ballpark, big powerful lights on towers cast a wide glow around the venue so the players and fans all are well lit, however neighbors and anyone with the ballpark in their view also have to endure the glare. A more efficient approach is used on the average college campus – a multitude of small lights located much closer to the ground provide enough lighting for people to see at night without creating a glare for the neighbors.
The distributed speaker system uses several tiny, low power speakers throughout the audience area. Each speaker covers a small portion of the audience and combine together to allow everyone present to hear the performance. But since a smaller volume of sound is being created, it travels less far and is contained within the audience area. This is not a powerful system, like you would use for a rock concert. A system like this only raises the volume of the music on stage enough so it can be comfortably heard; for example enough to make a bass and the flute audible above background conversation and ambient noise.
The operation of this system is the ultimate in simplicity. Instead of a complicated mixing board and volume controls, the system is permanently installed and its adjustments tuned to the acoustics of the stage, then locked off to prevent tampering. As such, there is one switch: on and off. In the “on” position, three small microphones above the stage pick up the music or whatever is happening on stage and send it to a series of small speakers hidden around the common area. In the “off” position, the system is disabled.These days small outdoor speakers of modern design can be hidden in rocks, or bushes and still sound quite good. JBL outdoor models seems are a great value at just $100 each. They have a full sound, but their small size allows them to be hidden virtually out of sight.

Conductor Gabriel Sakakeeny, himself a noted audio expert, has endorsed my distributed speaker approach. “This distributed approach is far better for minimum power but maximum audibility across the area. Some of the current coaxials are really good. EQ’d for a neutral response, the system would be very ‘stealthy’ and hard to complain about. [Microphones] permanently installed so that they could be invisible. You stand on the stage and you just happen to be more audible than people not standing on the stage. ”

Here is a simple comparison: A typical reinforcement system would have a pair of speakers on the  stage. The speakers have to be loud enough to cover across the entire audience area, which means they have to use a high sound volume and require mics to be placed manually near the musicians and manually adjusted each time to avoid feedback.  Here is a graphic of a such a typical sound system. The colors correspond to the amount of the sound reinforcement being heard. The yellow, green and aqua volume levels are high enough to be clearly heard. (model: Meyer Sound Inc., Berkeley)

By contrast, a distributed system uses several small speakers, permanently installed surrounding the audience area. Each speaker is facing inward. And since each speaker has a small area to cover, the sound coming out of it is only a fraction of the volume. The result is that the audience hears a subtle reinforcement of what is happening on stage from the speaker that is nearest to them.  Here is a graphic showing a sample distributed sound system installation  with nine small hidden speakers. Again, the colors correspond to the amount of sound reinforcement being heard. 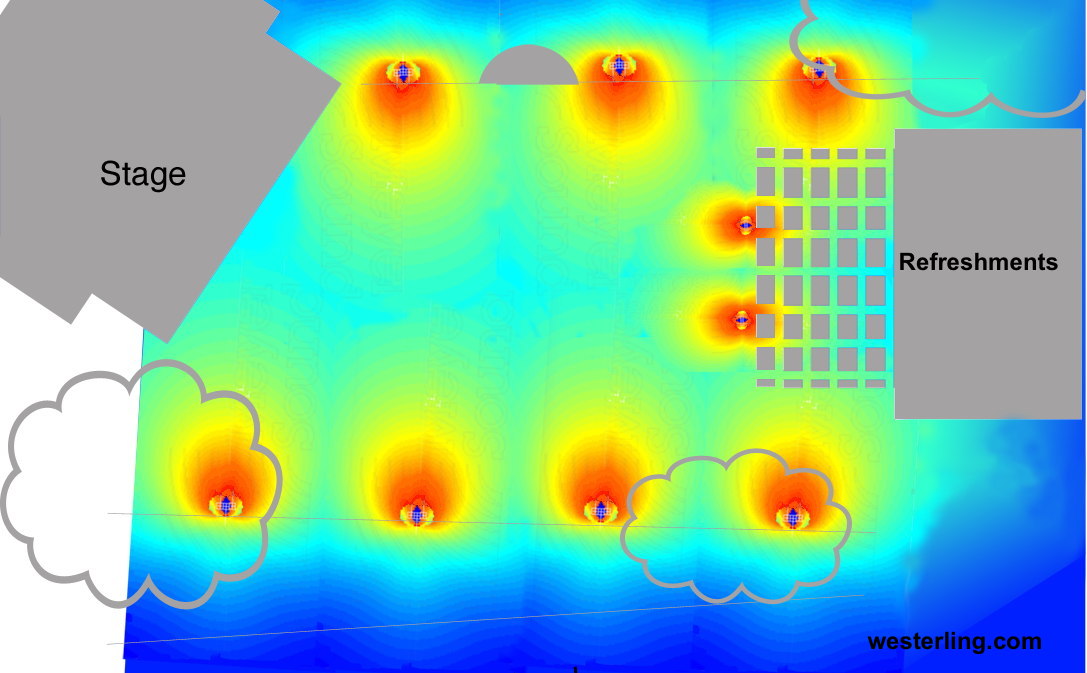