Its well documented that Fritz Reiner, one of the most well known conductors of American classical music led ensembles with a baton that barely moved. In Conservatory, many of us shared an apocryphal story about how he once fired a musician for bringing binoculars in a rehearsal when to help “find” the beat.

One afternoon, I set out to try to find whether there’s any kind of authentic evidence to back up the story. Now thanks to Google’s news archive, we have a first person account of the actual event. It occurred between 1938 and 1948 when Reiner was conductor of the Pittsburgh Symphony. The tale was retold in a 1962 Pittsburgh Gazette article by violinist Clement Iandorio:

According to Iandorio: ‘The most humorous event for Iandorio occurred during the
reign of Reiner as conductor. Reiner stopped a rehearsal one day when he noticed a bass player looking at hlm through binoculars. “What, are you doing?” growled.
Rainer. “Im trying to find. your beat.” the bass player answored. Reinerr raised two fingers.’ signifying two weeks notice and fired the bass player.’ 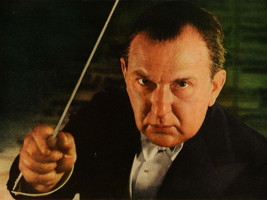 Here‘s the original article. Looks like this one’s true after all!