The Low A Extension for Fox Contrabassoon

Elegant, stylish, and sound enhancing – presenting a removable low A extension for contra made from recycled materials. Want to know more? Please reach out! 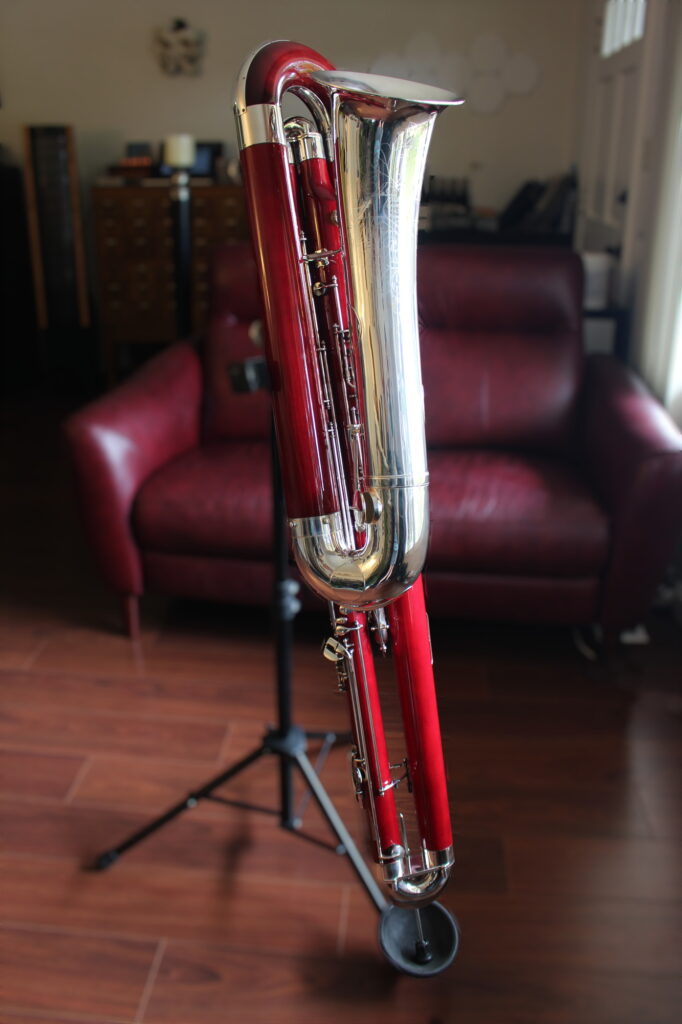 THE DESIGN: Having completed a few different low A bassoon extensions (see here, and here), I decided to tackle the same thing for my Fox 920 contrabassoon. The design I ended up with recycles the bell and key work from an older Bari Sax. The extension also amplifies and redirects the contra sound towards the audience and creates a stunning appearance. It can be replaced by a standard bell when the extension is not required. Also the original bell can be re-attached at any time to revert to the “OEM” design if desired. Please contact me if you’re interested in enabling a similar modification to your instrument.

BACKSTORY: In the middle of Covid, I decided to undertake a musical hardware challenge that I had spent a while pondering: How to add a low A to a contra in the most functional and economical way possible. The initial designs I considered were either too difficult or ended up with a very kludgy appearance. The breakthrough moment came when I started experimenting with a bari sax that was found in the graveyard of a local music shop. The instrument was already silver-plated so it would match the contrabassoon, and experiments proved that its size and shape were ideally suited to the task.

Early on, I decided that I wanted the Heckel approach; the low A should be a removable extension to the horn so that it can fit in its normal case for traveling and standard use. Of course, going with the removable approach meant that I had to devise a linkage between the wood and the metal bells which would not leak but which was elegant and didn’t require any special hardware to put on. The result is one which uses rubber gaskets and gnarled bolts which secure the bells to the wood without the use of any screwdrivers. In addition, a strong metal tube supports the main weight of the bell directly to a metal bracket on the stack of the horn itself.

Last but not least were the additions of several collaborators who helped with certain aspects of the design where I wasn’t able to complete the fabrication. The most notable of which is certainly Eric at Saxcraft in Berkeley whose artistic skill finessing the metalwork really makes the end result look professional. Thanks Eric for the wonderful collaboration! 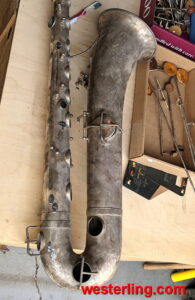 THE LOW A BELL: After deciding to try my experiments using a Bari Sax bell, I looked for one which was already silver-plated and was able to find a 1928 Martin Bari which had seen better days. I kept the keys and pads so I could check intonation, but literally took a hacksaw to the bell at approximately the correct place for it to mate to the contra at the same diameter. After roughly determining the geometry of the bell as it relates to the contra, some physical modifications were made: the bracket was relocated to the necessary height to mate with the contra body and the bell section was unsoldered and pivoted on its angle so it will mate perfectly with the contra and point outwards.

Since not all of the holes are needed the rest are covered with patches. A small hole is needed and placed strategically to assist with intonation and to nullify a standing wave in the bell which occurs when playing softly. 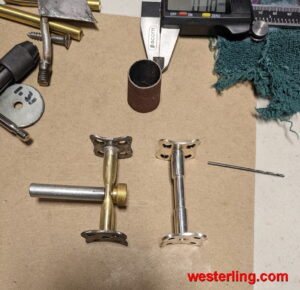 Fabricating a new brace to secure the low A bell.

THE LINKAGE: I experimented with several methods to provide a strong mechanical connection between the bell and the instrument. This is necessary to make sure that the longer bell is securely attached to the instrument. In the end, it was necessary to replace one of the brackets on the contra with one that has a place for the bell to connect it. 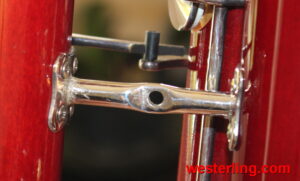 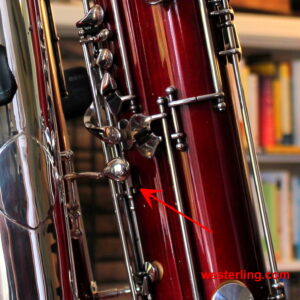 THE KEY: Of the four pads on the low section of the Bari bell, only one opening is needed to play the Low A. This is a bit tricky since the key itself that is pressed actually needs to face backwards from the bell so it lands snugly next to the left hand pinky keys already on the contra. A roller arrangement makes the key action very lightweight since the pinky itself isn’t normally a very strong digit. All of the parts from the key work are reused from the donor Bari. 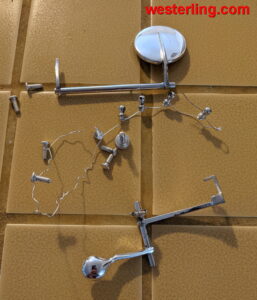 The key work as it returned from silver-plating in Berkeley.

After reworking the keys, the whole arrangement is sent out for plating and polishing to retain a shiny appearance. 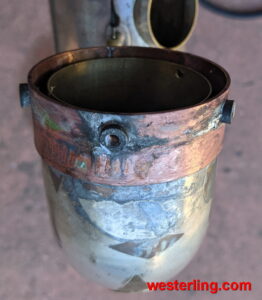 The thumb screw nuts being soldered onto the fabricated copper collar.

CONNECTING METAL TO WOOD: The biggest mechanical challenge was mating the bell to the wood. Fox uses a very sturdy design with both an inner and outer ring to secure the bell. While the Bari’s bell mated to the inside of the horn perfectly, the outside collar had to be devised from scratch, and also refined to accommodate the precise angles necessary for a smooth fit.

The other fabrication piece is the four knurled head thumb screws and round nuts which affix the bell onto the wooden tube of the contra. The nuts are on the outside to enable easier gripping of the thumb screws. 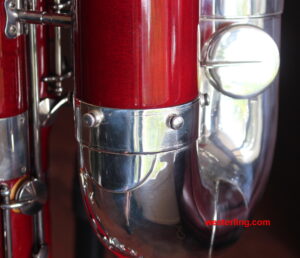 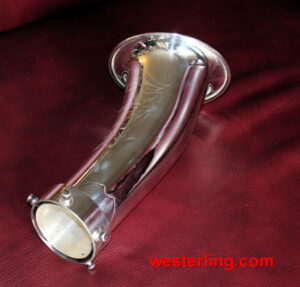 ECOND BELL: For normal usage, i.e. the Low A bell is not needed, I wanted to have a standard bell which could also be attached relatively easily. For this purpose, it turns out that a C melody saxophone bell is *exactly* the same as a standard Fox bassoon bell. So I purchased a damaged but silver-plated Buesher C Melody sax and fabricated a standard bell from it. It was made removable with the same connection hardware and thumb screws that had been created for the larger bell. Thanks Steve Wilson for turning the brass collar on this one. 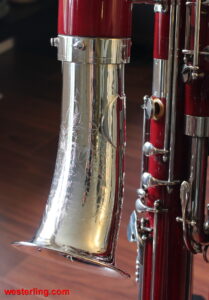 THE END RESULT: I’m very pleased with the new bells, and the result is not only impressive, but compliments the shape and lines of the contrabassoon itself. The fact that this gives a new life to two instruments which had seen better days is icing on the cake. By the way, it turns out that a tenor sax bell would also work; this option is also possible though the size of the final extension is obviously reduced by half. I’ll be posting videos of the sound and updating this article with additional information over the coming weeks. My next challenge is finding a case to transport the low A bell separately from the contra. Thanks for reading! Feel free to leave questions and comments below!

Here is a photo of the first performance using the new bell. I was performing the Symphonic Dances by Rachmaninoff in the Peninsula Symphony Orchestra. 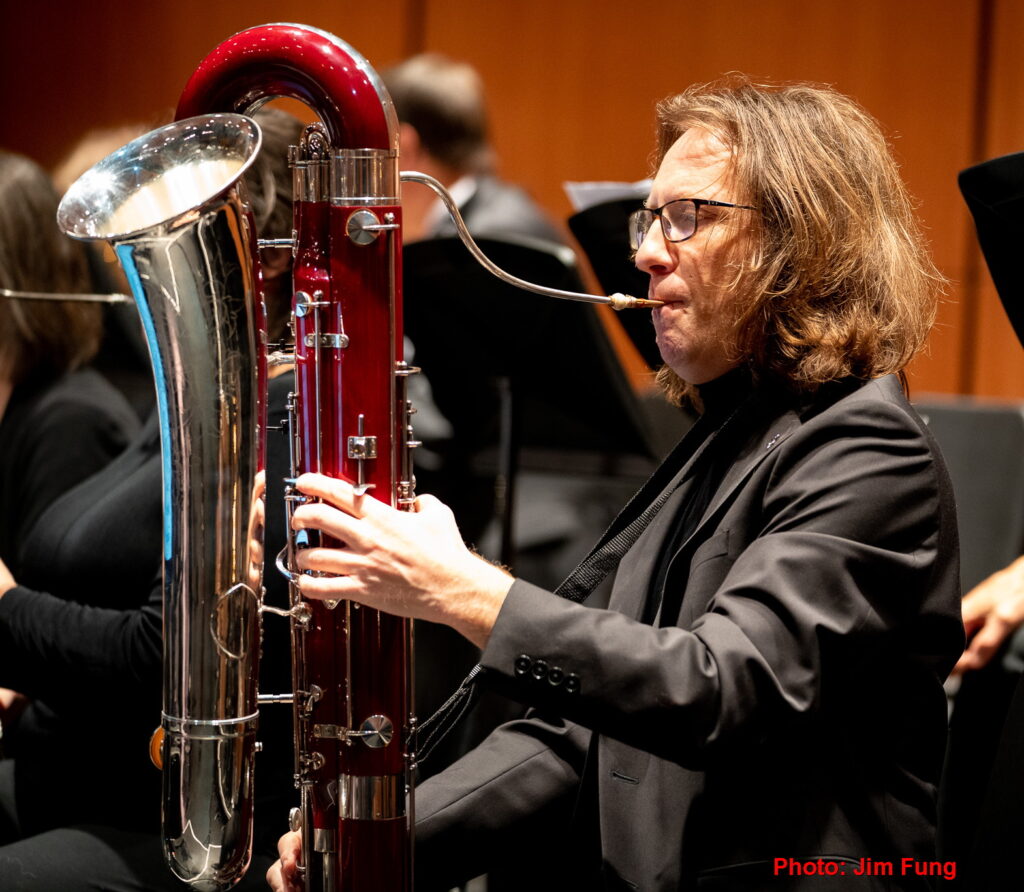