Phil Frank was a good friend and neighbor. He was also the cartoonist in the San Francisco Chronicle. His first love was MG’s, but as the century turned, he began to lust after a new car: jaguars, specifically the MK2. Here’s the car as Phil purchased it in 2004: 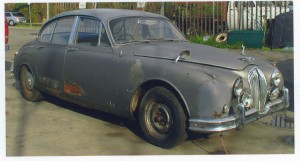 Phil completely redid the drive train and took care of the fantastic amount of body work that needed to be done. Within two years, things were looking much better: 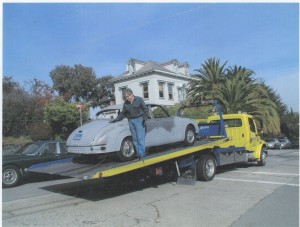 Unfortunately Phil got sick and passed away in 2007. We miss you Phil! A year later, I had the chance to purchase the car (thanks David!) and I inherited six huge tubs of parts, and written directions to the paint shop where the car had been stored for a year.
After a few years of Sunday morning worksessions, I’ve managed to get “Phil’s Jag” looking as good as Phil would have wanted. 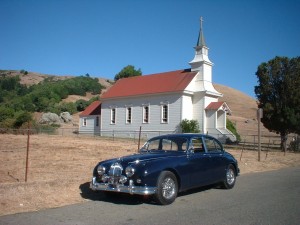 Here’s a picture from July fourth. We dressed the Jaguar in red white and blue for July Fourth. The irony wasn’t lost on some of the parade-goers who would have preferred to see an AMERICAN car in the parade, but others remembered Phil fondly and gave us great support! 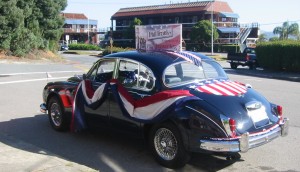 I’ve got a little work to do on the interior, so stay tuned for more pictures in progress…